What a wonderful week! The weather has been B-E-A-UTIFUL which meant we were able to trick-or-treat without eighteen layers of clothes, ride bikes, and even play outside in tshirts or sweatshirts. Incredibly uncommon around these parts for November. We are soaking it up as long as we can. Every night the big boys prayers have included a thank you to God for the beautiful weather. I second or third that with a big ol’ AMEN! 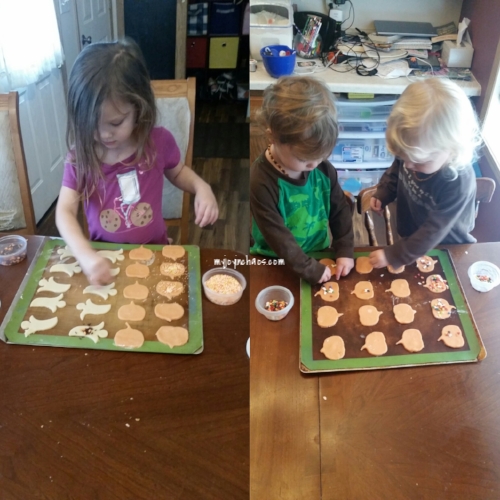 I surprised the little three with pans of sugar cookie cut outs to decorate for a Halloween treat. I was incredibly impressed with the little guys ability to stand next to each other and decorate the same pan of cookies without fighting. I also used some extra dough to get a head start on my Christmas cookies. They are baked and in the freezer so all I need to do is pull them out and add frosting and sprinkles. Yay! 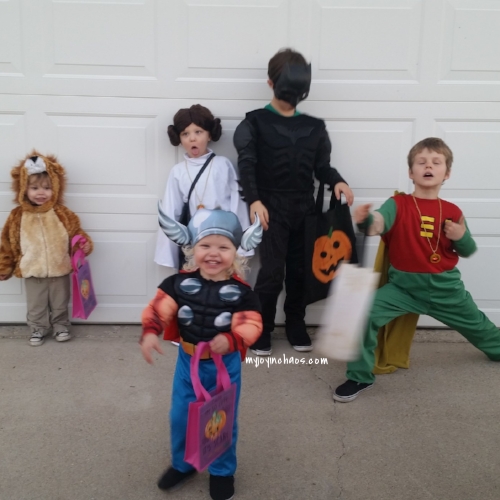 Trick-or-treating this year was such a blast! We thought for sure that the little guys would refuse to get dressed up or tire out after a few houses. We were wrong on both accounts! They eagerly got ready and ran from house to house! They lasted over an hour and actually cried when we took them home. The big kids went out for an extra hour once they added another layer of clothes under their costumes. We are good on candy. SO MUCH CANDY. Nom nom nom… 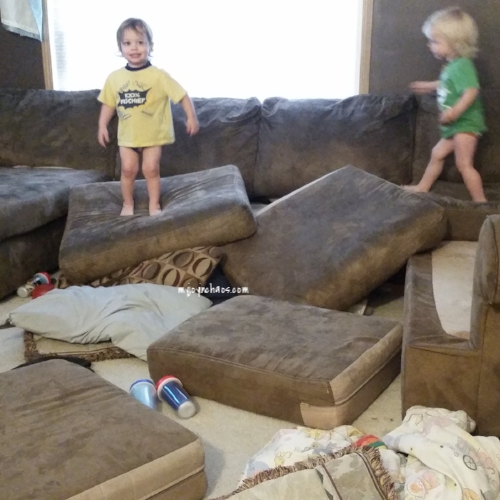 We moved the boys climber to the deck this spring but they still want to climb everywhere all the time, obviously. Who needs a real climber when you can use the couch cushions to create your own climber? They do this EVERY DAY. When it first started I tried to keep putting the cushions back and stop them but I realized it’s good fun. I do have to stop them from stacking them near the half wall and climbing or making a tower to get to the tv but otherwise it’s not a battle I need to fight. And they have so much fun! 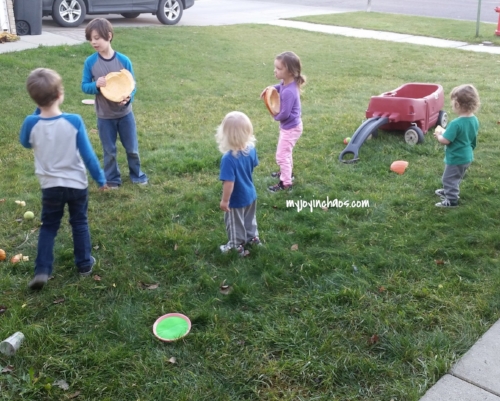 This weekend while the kids were playing outside we let them destroy the pumpkin I carved. It was going to get destroyed anyway so why not let them have some fun? We did give them the disclaimer that they are only allowed to ever destroy pumpkins that belong to us and that we have given them permission to smash. Oh man did they love this. Permission to be destructive? They smashed pieces all over the ground until there were only little bits left. They they had to clean it all up and throw it in the trash. Win for everyone!

Why do we buy toys? Buckets, boxes, blankets, and pillows. I swear that’s all a kid really needs. And apparently all Mercedes needs is a camera 😉 My silly little gooses. Plus Cade sitting next to me yelling for milk. I love these quiet nights of just being with the kids and letting them play. No rushing, no agenda, just together time

What brought you joy this week? Are you having warmer than normal temps this fall?

Don’t forget to head over here and snag your FREE Printable Holiday planner!

Raspberries, another birthday, and the letter L – five places I found joy in the chaos this week

Solar Eclipse, end of summer, and beginning of school – six places I found joy in the chaos this week

Goose watching, homemade sushi, and oodles of kids – 5 places I found joy in the chaos this week