We have been having so much fun with our Countdown to Christmas activity calendar! The kids wake up each day eager to find out what they get to do that day and we’ve really enjoyed each activity. Sometimes the little guys get to be involved, like for decorating cookies, but most of the time it’s just for the bigger three. Eventually they will all be old enough, though! We only have a few days left and the last few are going to be so fun!

So what brought joy to my heart this week? 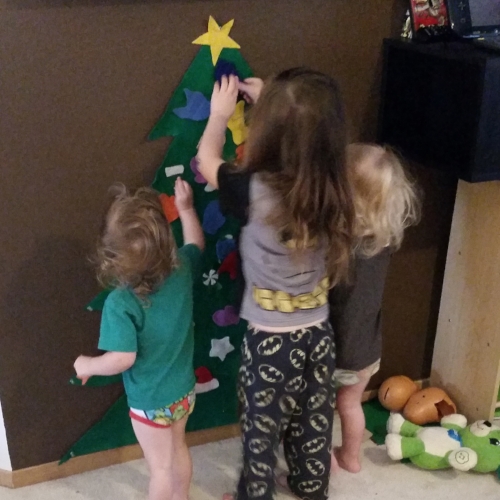 I made this about five or six years ago to distract the big boys from the actual tree. I traced my cookie cutters on felt to create the ornaments and cut the tree out of a large piece of felt. If you can work scissors you can make this yourself – it’s so simple! I put the tree up using push pins and all the kids need to do is let the fibers from the felt keep the ornaments attached to the tree. They decorate and un-decorate over and over again. They play with this every day so I’m so glad I’ve saved it for all these years! 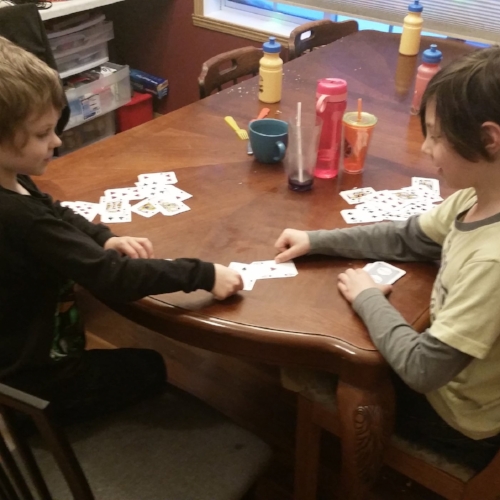 I grew up playing card games and board games constantly and while our kids enjoy board games I haven’t taken the time to teach them many card games. Last week I taught the big boys how to play War and they played it for about two hours straight on two separate days. I don’t think I’ve ever seen them play a game that long together! I promised I’d teach them another game over break so they are anxiously awaiting school getting out later this week. 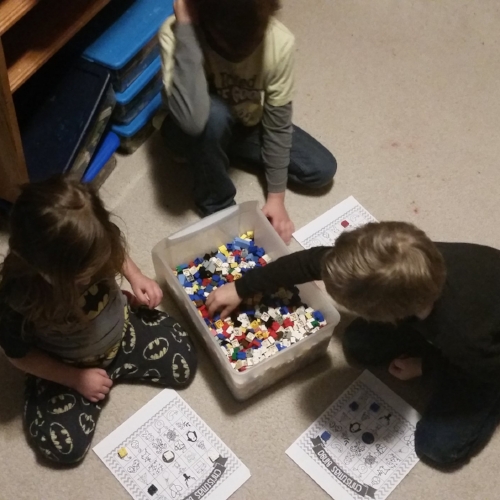 One of our Christmas countdown activities was to play a Christmas themed game. I printed off this Christmas BINGO game last year and saved it in a folder which helped with my prep time this year – just pull it out! They used small LEGO bricks for markers and I think we played three or four rounds with different patterns to match each time. I’ve “caught” them playing on their own a few times since then as well. They love dong “blackout” bingo and filling their entire board. 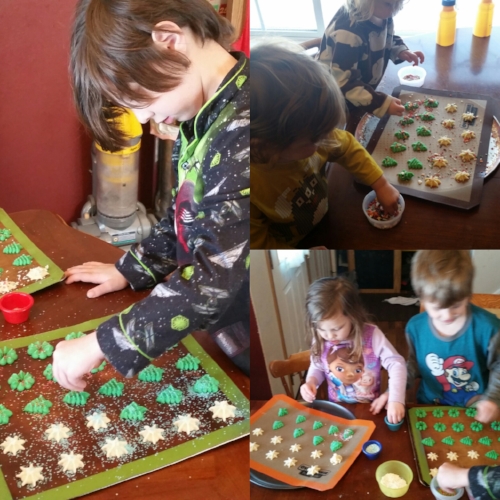 We spent Saturday morning filling our cookie jar back up with various yummy treats. We made a new batch of spritz along with chocolate crinkles and puppy chow cookies. The only thing left on my list is cut outs. It’s very fun to see the difference in personalities come out in cookie decorating. Mercedes wanted each of her spritz cookies to have every single type of sprinkle available (not possible on tiny cookies!) where as Jamison was more precise about placing his sprinkles. Parker tried to do two or three coordinating sprinkles on each cookie and the babies decorated a couple cookies with ALL THE SPRINKLES and then ate the rest of the sprinkles. 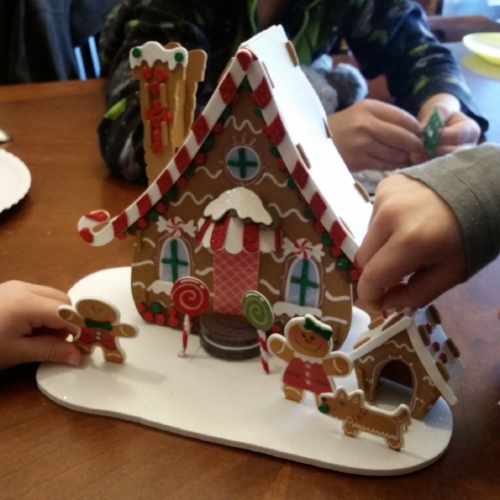 Parker has been BEGGING to make a gingerbread house since sometime in October but he’s the only one in the house that eats gingerbread. Also, that’s a lot of money to pour into a project that usually just gets tossed in the trash. I decided to buy this kit at Michael’s so we could have the basic idea of the gingerbread house without the food waste. The kit was normally $10 but it was on sale for $5 plus I had a 20% off coupon. I was totally willing to pay $4 for a craft kit that the three big kids could work on together.

It took us about an hour to work together getting it all assembled but they really enjoyed it. Mercedes had some trouble getting her pieces to lock together and I helped with lots of those parts but they all loved putting on the stickers. It’s definitely better suited for kids Parker and Jamison’s ages (like the box said) rather than preschoolers – but I knew it wouldn’t be fair to leave her out. 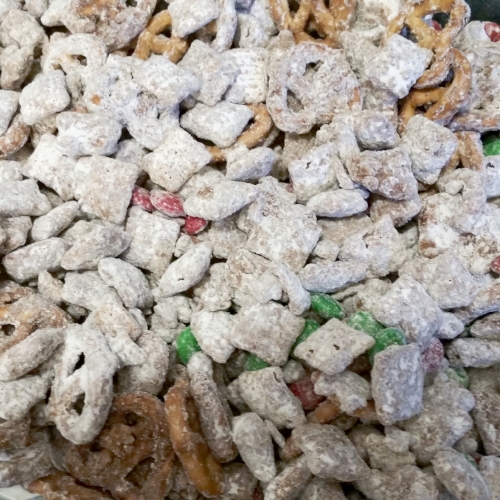 When I came across this idea on Pinterest I knew we had to make it! I included it as an activity on the Christmas countdown and we made it on Sunday afternoon. The kids took turns pouring and mixing the ingredients together and declared the finished snack mix delicious. I deviated from the recipe ever so slightly by adding in some of the pretzels to the cereal mix that gets coated in chocolate and the rest of the pretzels after the puppy chow portion is made. This resulted in some chocolate coated pretzels and some plain pretzels. It created the perfect sweet/salty mixture that is incredibly addictive! I finally had to transfer the mix to a closed container rather than an open bowl so there would be some left for later.