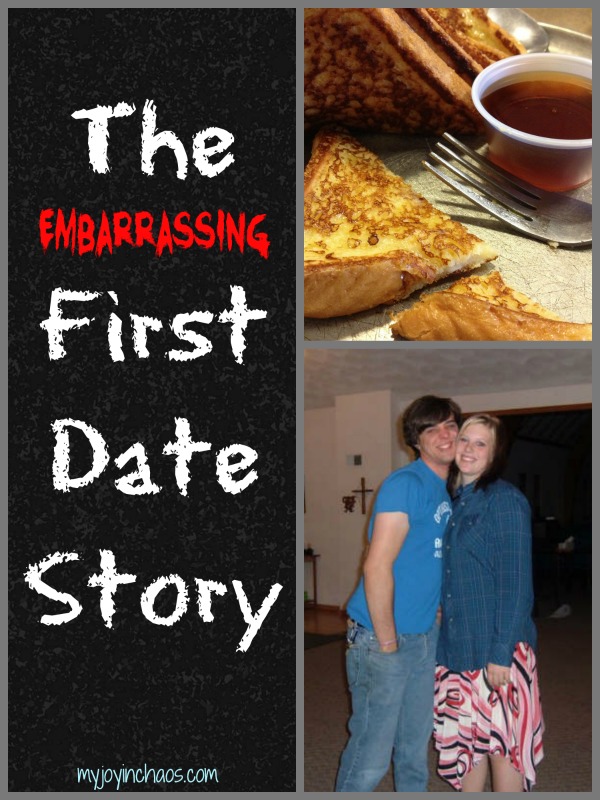 I’m pretty sure everyone has an embarrassing first date story tucked away. Or maybe it’s a few dates later but I swear it must be a right of passage of nearly ever person to experience some type of minor (or major!) humiliation on the dating scene.

Micah and I met in the spring of 2004 during our sophmore year of college and I was immediately smitten. He had longish curly hair, ear plugs, and a lip ring. The ear plugs are the only thing that have survived but I still think he is darn tooting cute! We hung out with a huge group of people but rarely talked. One night in the fall when we were all hanging out at his house I was complaining all about a recent date I had gone on.

My roommates and I decided to each ask a guy on a date to go see our other roommate in her play and then we would take the guys to dinner. My date was a soccer player from school that I occasionally hung around with and he took this as the opportunity to totally use me. He ordered a huge meal, drink, and dessert and I’m pretty sure I barely got a “Thank you” from him. Jerk.

After my miserable recount was over Micah pipes in and says, “You can take me out on a date!”

My eyes LIT UP, guys. Here was a guy I had been crushing on for about six months but had never had more than a superficial conversation with and he wanted to go on a date with me! Ack!

I was nervous as all get out when the night finally came. Partly because hot guy and partly because my bank account did not agree that I should be treating anyone to dinner. Ugh. I fessed up and he was willing to pay.. this time. He made me promise that I would actually treat him the next time (Next time! Squee!!)

We went to Denny’s because… broke college kids. I don’t remember what he got. Probably a burger or some other type of sandwich because the boy loves french fries. I got French Toast because I love all things breakfast.

All was going along swimmingly. We were eating, chatting, getting to know each other, usual first date (even though this was NOT a real first date. It was a FRIEND DATE) conversations when it happened.

I can still remember exactly what I was wearing – A green Early November tee with a long sleeved white shirt underneath and jeans. The jeans were a medium blue color and now the whole front of them from my waist to my mid thigh was a brown sticky mess. I didn’t know whether to laugh or cry but I’m pretty sure I laughed. And so did he. And I shook my head and couldn’t believe I had just spilled several ounces of syrup on my lap on a date with the most beautiful guy ever. No coming back from that one!

I cleaned up what I could and we finished our dinners. I just wanted to go home and take a shower. To rinse away the sticky and the embarrassment. Nope, wasn’t going to happen. He needed to pick up some supplies for his art class so off to WalMart we went.

This is where things really get awkward. I could only clean up my pants so much while sitting in a diner booth. And I didn’t want to go to the bathroom and attempt to wash it off because then I’d have super wet pants and it was a pretty chilly night in late October. Thankfully I had a long coat to cover up the spill but that didn’t change the fact that my pants and thighs were super sticky still.

We are walking around the store and because enough time has passed since the actual spill the syrup that is left has started to thicken and adhere my pant legs together. With every step I took the fabric would peel away from itself and stick back together. Like suction cups or feet walking through thick mud. Schlooop, schlooop, schlooop. I’m positive the whole store could hear my syrupy pants.

Finally he had gathered his supplies so we were able to leave. Now I’ll get to go home and shower! Wrong again. We got back to the house and I clearly needed to go inside and show off to the other guys how awesome I am. Thankfully I have a great sense of humor and these were good guys that would laugh with me, not at me, so I went in. I recounted the whole story, along with sound effects, and we all got in a good laugh.

Clearly my klutziness and resulting embarrassment wasn’t enough to scare Micah off. We went on several more “friend dates” before he finally decided to make it official. He asked me to be his girlfriend on January 11th, 2005 and on November 19th, 2005 he asked me to be his wife. Today is ten years since we exchanged vows and he is still putting up with my klutziness.

What was the most embarrassing thing to happen to you on a date?