Do you want to know my favorite part about starting this blog and making a point of choosing to see joy in my normal, everyday life? I’m seeing it everywhere now and it’s so hard to not want to share CONSTANTLY about the joy around me.

What an amazing week! I really had to control myself in choosing moments to share with you but I still have a boatload to show. It wasn’t like we did anything crazy out of the ordinary either. I made a slight adjustment of my attitude and behavior and with a small little tweak came even more joy! Just goes to show that joy and happiness really is a choice! 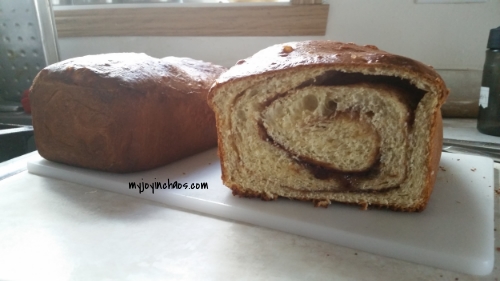 I left a jug of unopened milk in the fridge when we went out of town for the weekend. The “sell by” date was a day or two after we were due to return so I figured we’d be fine and just need to use it up quickly. Monday night I went to make a bowl of cereal but decided to taste test the milk first. I’m so glad I did! It was just on the verge of going sour so I spent most of the day Tuesday baking to use a good portion of it up. I made Pioneer Woman’s Cinnamon Bread and two pans of Cinnamon Roll Coffee Cake. I put one in the freezer and we ate one the next day for breakfast. And on Thursday I turned the two loaves of cinnamon bread into French Toast. The rest of the milk was measured into containers and put in the freezer for future baking projects.

2. Cade trying to capture the cat 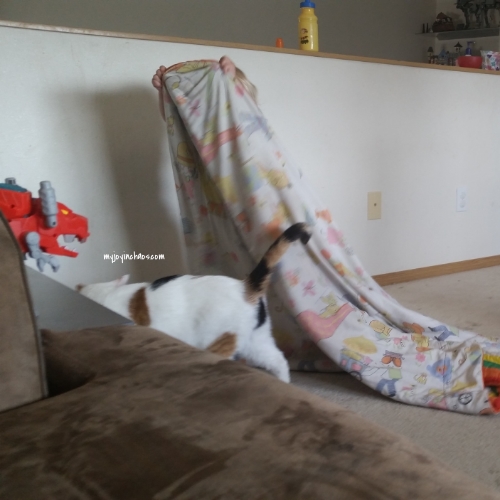 3. Playing in the sprinkler 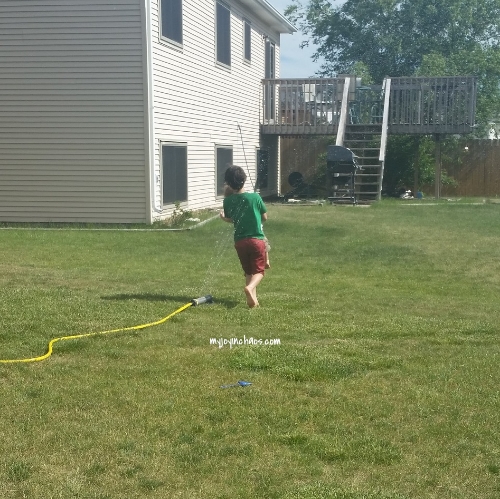 I got brave and moved the sprinkler down into the yard this week. I’ve always been nervous about the little guys running away since our yard is not fenced but if I never give them a chance, how will I know? Not only did the little guys enjoy playing but I got in on the playtime! I stepped out of the management roll that I so often put myself in and PLAYED WITH the kids. We made up a game called “Mommy Monster” where I chased them around and if I caught one of the kids then I swung them through the water. We were all wet and giggling like crazy by the end of the game. 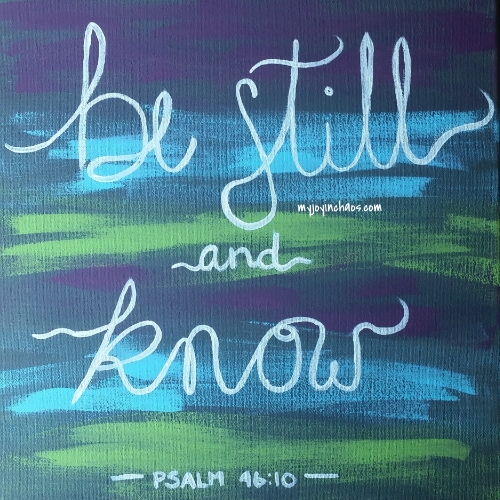 I finished another project I’m working on. I didn’t know where I was going with the background paint and simply started brushing paint around. I’m really pleased with the way it turned out and I’m tempted to keep it for myself! But I wont. 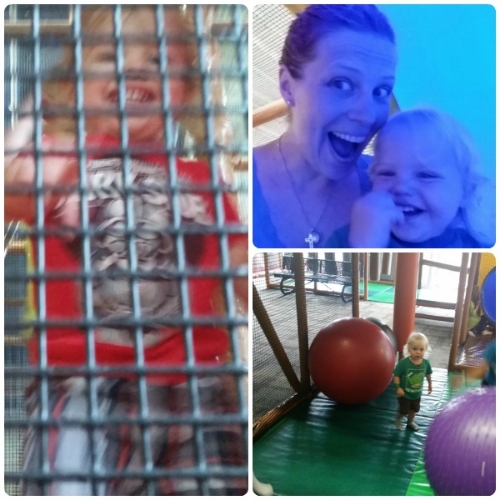 For our final weekly adventure of the month we met some friends at an indoor playground and goofed around for about two hours! When we first arrived it was really quiet and only a few other kids were around so I was able to bring the little guys into the larger area rather than being confined to the toddler area. They had a blast climbing around and going down the huge slides. I couldn’t get pictures of the big kids because they were so fast going through all the obstacles! 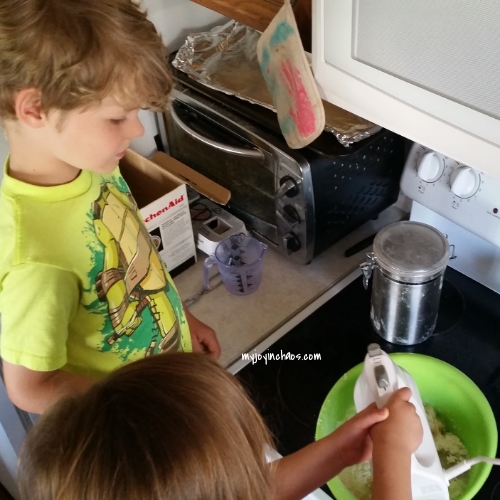 I froze a few bananas before we left for the weekend so we could turn it into Nana Anna’s Banana Bread once back home. The kids love helping in the kitchen and are turning into actual helpers rather than mess makers 😉 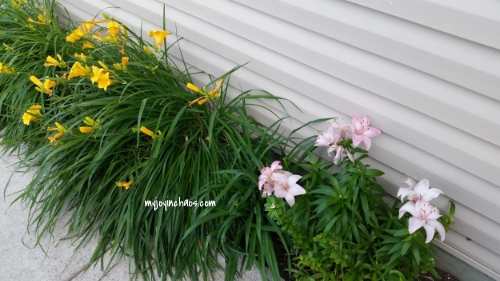 I don’t care about flowers most of the time. Getting them as a gift is nice and all, but to me they just end up causing clutter and extra clean up as the petals and leaves fall off. Micah appreciates this 😉 But flowers outside? Especially the kind that flourish without any help from me? AWESOME! I just leave these pretty guys alone and they come back year after year. Absolutely perfect for me. 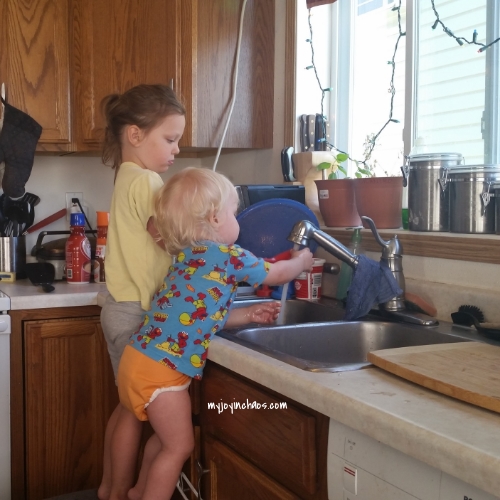 I heard a quote once about parenting. I don’t remember the exact wording but it was something along the lines of “raise your children in such a way that you’ve worked yourself out of a job.” Basically teach them the responsibilities they will need as an adult starting at a young age so they can be doing those things around the house to help you. We are trying to do this but sometimes it’s so much easier to do it ourselves to save time and often times an extra mess! But it’s also important to teach them these skills and at this age it’s pure fun for them! Mercedes and Cade helped rinse breakfast dishes this week and while we had a great amount of water on the floor we also helped instill an important skill. 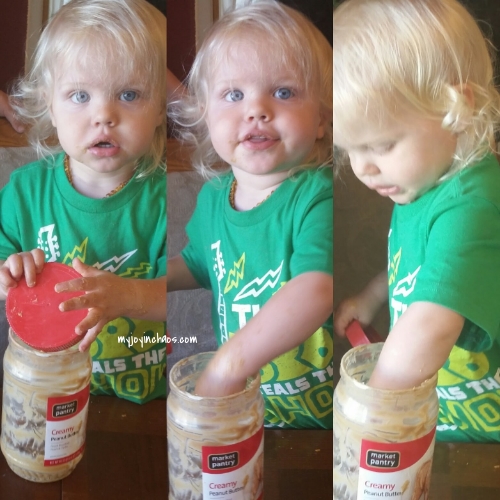 He loves peanut butter as much as his mama. He found the near empty jar on the table from lunch and helped himself. I thought about stopping him but he was content and keeping busy where I could see him while I prepped dinner. Sometimes it worth setting aside normal rules and letting the kids enjoy something special. Plus, the pure joy on his face indulging in something he loves (and doing something I’ve thought about doing!) filled this mama’s heart with joy as well!

Okay, I’ll stop there 😉 What a wonderful week! I can’t wait to see what this week brings.

Where did you find joy this week? Let me know in the comments!

Did you hear about the new weekly devotional I’m hosting? It takes place every Thursday right here on the blog! Click here to find out what you need to know to join in.