(Note: This post contains affiliate links. Possibly several of them. Check out the disclosure policy to find out more.

I tried to make a point of having my phone within grabbing distance so I could snap more pictures this week. And now I have lots to share with you! Oh my, what a week. It’s still a little crazy around here because Micah’s schedule is insane. He’s working about 16 hour days at this point and instead of his normal four days for the week he’s going almost non-stop. But August is almost over and we can resume our normal schedule. Thank you, Jesus! But despite the insanity of his schedule and all of us feeling a little Micah/daddy-sick we are chugging along and doing our best to enjoy the last of summer break. 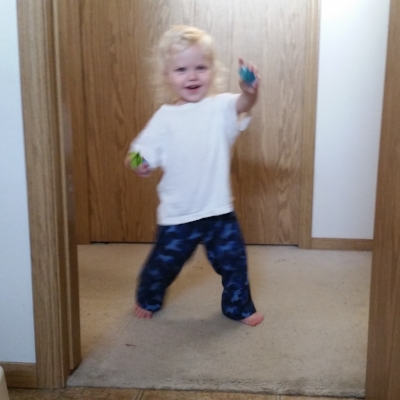 He barely looks like a baby anymore! Okay, so I know they are going to be two in just over two months but he looks like a full blow big kid in his pj pants and a white shirt. And he talks, he’s basically potty trained, and he eats pizza like he’s never been fed in his life. He’s a kid! But the perks of the baby stage fading behind us as the little guys grow up? So very sweet.

2. And also this kid 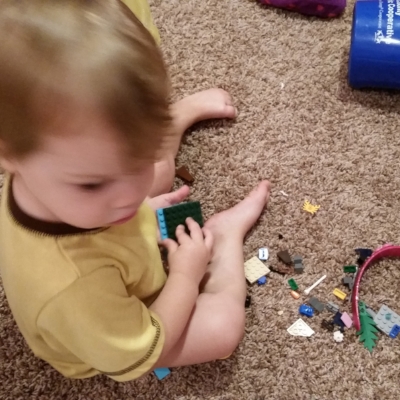 Anders has also decided he’s a big kid and is constantly trying to steal the big kids’ LEGO sets. But he’s getting pretty good and figuring out how to line the pieces up to make them somewhat stick together. I can’t wait until they are actually old enough to build LEGO as well and all seven of us can spend hours building awesome creations together. 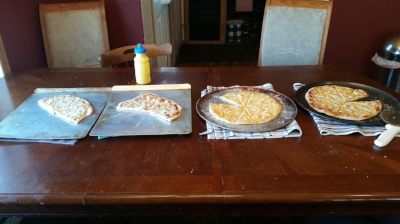 Usually on Friday nights we make individual pizzas with regular pizza sauce and normal pizza toppings. This Friday I decided to change it up to brighten the kids’ moods. They were bummed that Micah had to stay at work and was going to miss out on pizza night. I made four different pizzas – Thai chicken, pineapple & olive, buffalo chicken, and pepperoni & olive. By the end of the night the Thai chicken was gone, half the buffalo chicken had been eaten, and only three slices of pineapple & olive were left on the tray. The pepperoni & olive pizza only had a few slices take out but that worked out well since it would be the one Micah would for sure want. It was a great treat for the kids and Jamison raved about what a great idea I had.

4. This new plot of an older movie

I was browsing the guide for something to watch and this caught my eye. I loved Matilda when I was younger but then I noticed the description. I don’t remember Matilda being about a boxing kangaroo! Maybe this is a remake? 😉 But now I want to read the book with the kids and watch the movie, the real movie, again! 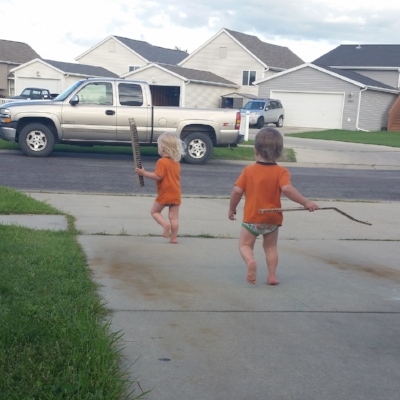 Our neighbors were staining a new set of shelves this weekend so they had a few cardboard scraps from the packaging lying in the grass. We were outside playing and they let the kids take the pieces. The big kids started sword fighting so the little guys joined in. Of course it was impossible to grab a picture of the big kids but I managed to snag one of the little guys. They even started yelling, “hi-ya” just like their big siblings. I love seeing them using their little imaginations!

6. Looking at the clouds 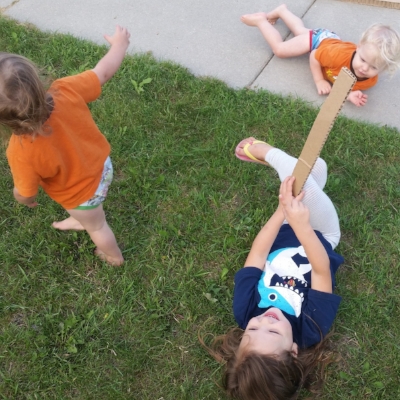 During all the sword fighting Mercedes plopped herself down at the grass and told me she was looking at the sky. Next thing I knew Cade had joined her and Anders made his way over as well. She shouted out all sorts of different clouds that she was seeing over the span of several minutes. So cute!

We’ve been working on this for so, so, so long and I’m overjoyed that they will finally say it without me needing to move their arms for them. I think this was my favorite moment of the whole week!

Where did you find joy this week? Tell me in the comments below!