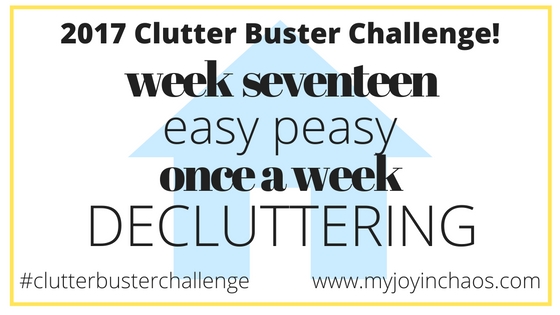 (Note: This post may contain affiliate links. Possibly several of them. I will earn a small commission if you use my links to purchase a product but your purchase price does not change. Check out the disclosure policy to find out more. Thank you for supporting My Joy in Chaos.)

How crazy was under your bed? Tidy and organized or filled with dust bunnies and lost items? I still can’t believe my space was filled with Christmas magazines! That means those had been chilling in that spot for over four months. Man my slob vision is terrible sometimes. But now it’s clean and empty and I’m ready to move on.

You can read more about the challenge on the week one post.

Why is it so darn easy to pile things on top of flat surfaces like dressers and then ignore the piles? I’m growing to hate flat surfaces because of how easily they attract clutter. That desk I cleaned off a few weeks ago for kitchen surfaces? I have attacked it at least twice since then and a few days later I can’t even tell. And the ledge from week two? While it’s significantly better than it ever has been long term I still find it collecting items like ripped books that need tape, small toys we’ve confiscated from the kids, and other random trinkets looking for a home. Constant upkeep!

And dresser tops are no different. Look at these. Mine on the left and Micah’s on the right.

So much stuff. Mostly things that we have no idea what to do with or where to put so they get set here for a later date… that never comes.

First went the garbage and the items I knew for sure could be donated. I was slightly emotional getting rid of that chalkboard because we used it for weekly pictures for three out of the five kids. But I have chalkboards in the kitchen now for practicing letters and numbers so no need to hang on to this one.

Clothes went to their appropriate drawers (which I then need to deal with next week), yarn into the yarn bag, lamp to a new home (Mercedes room), and more garbage thrown away.

Micah’s dresser was mostly clothes. All the ties, minus the one from our wedding, went into the donation box. He does not wear ties. A few other clothing items found their way to the box as well. That red collapsible bin went bye-bye because it was filled with Disney Infinity figures that we aren’t keeping. We found a home for the iron on the closet shelves along with the book.

They are like brand new dressers! The Wolverine mask is still on Micah’s dresser because the Halloween stuff is in storage and this mask started breaking when it was in the bin last time. Kids get a little crazy and destructive around costumes. But it’s simply better. Period. I can feel the calmer environment when I walk in the door and every surface isn’t piled with junk. Ahhh, breathe it in.

What did you find to clean off your dressers today? Have you been able to donate, sell, or trash what you no longer want?

Share a picture in the comments or on social media with the hashtag #clutterbusterchallenge of what you found to declutter.

Come back next week for week 18 of the Clutter Buster Challenge to go through your dresser drawers. This could be a large task or it might go quite quickly depending on the amount of clothing you own. I really encourage you to be a little on the ruthless side for this task!