Every week I like to take a moment to showcase the moments that brought me the most joy. Sometimes they are awesome activities and other times it’s a sweet moment between the kids. There are always moments that can fill us with joy if we choose to see them with a thankful heart.

(Note: This post contains affiliate links. Possibly several of them. Check out the disclosure policy to find out more.)

What a great week! I don’t think I could have asked for a better start to the new year. I actually had to cut down the amount I was sharing because I had far more but didn’t want to make this post too long.

1. Playing in the snow 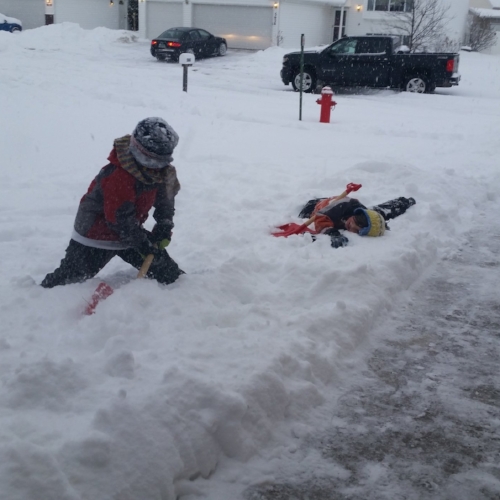 The beginning of the week brought us about 8 inches of fresh snow and it was warm enough to go out and play! The big boys bundled up and joined Micah and I outside as we shoveled the driveway and sidewalk. I think they spent about an hour and a half tackling each other and making laps around the house. It was the perfect last day of winter break for them! 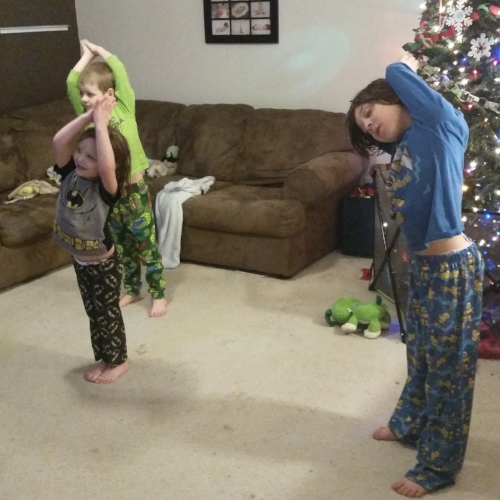 One of my goals in January was to start a family exercise routine with the kids. The first night we did a game of Simon Says and that seemed to work really well. We tried it the second night and all of them got crazy wild. Um… isn’t the point of the game to be good listeners? Yeah… chaos up in here. I found Cosmic Kids Yoga on YouTube and they followed right along. We are now doing a short video followed by a short game of Simon Says each night. They are cooperating more with getting the living room toys cleaned up as well because they know the faster they get that done the longer the yoga video will be. Wins all around! 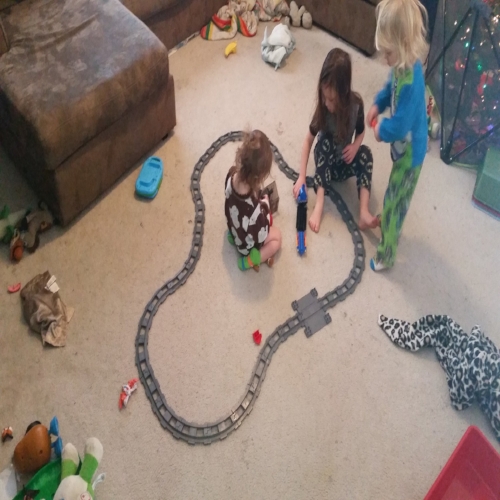 The little guys got new Duplo trains for Christmas to add to the small set they already had. Now we can build mega train sets! They are really great at putting the tracks together themselves which is great. I love finding toys that work on their fine motor skills. 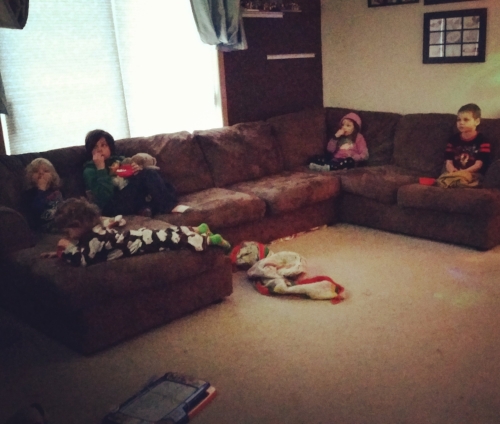 Sometimes we need to let go of plans and embrace what is in front of us. It was cold last week. As in negative temps most days. I declared a movie afternoon and gave the kids popcorn – after they had already had their afternoon snack earlier! I’m so scandalous 😉 They declared it an awesome day and begged to do it again the next day. Little surprises and changes in routine can mean so much to them at this age. 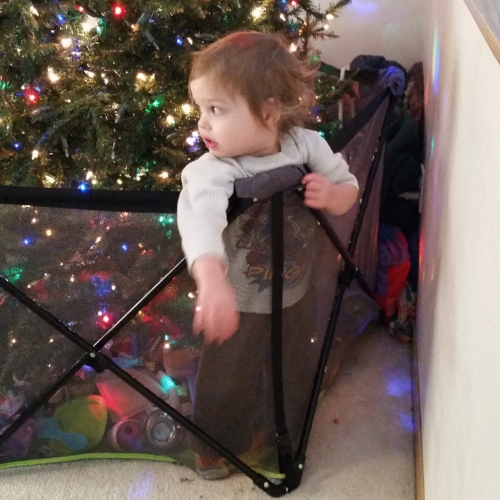 Oh, this boy. He is our adventurer. No hill too high, no bridge too long for him to cross. He saw candy canes up on the tree and decided he needed one. He figured out how to climb on the cross bars of this playpen to get himself higher. Then he found himself inside the pen. Stuck. He wasn’t too happy that I stopped to take a picture before getting him out. Sadly our tree is now down because of this. We couldn’t risk his safety over the pretty lights. We greatly miss the tree but it will be back in a little over ten months 😉 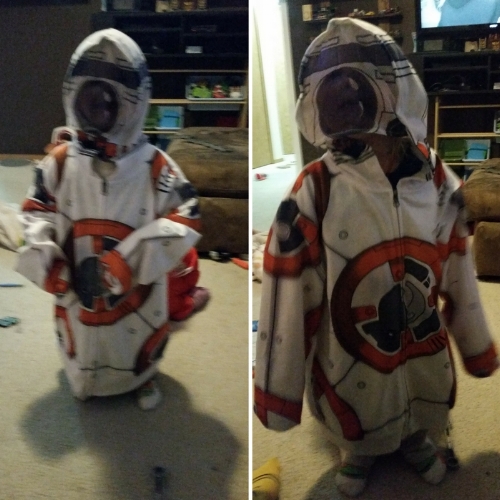 Jamison adores BB-8 from Star Wars The Force Awakens and was gifted lots of BB-8 items for Christmas including this sweatshirt. He wears it every day to school and I’m not sure how I’m going to manage to wash it since he wears it all day at home as well. Somehow the little guys found it on the floor one afternoon and tried it on. I zipped it up on each of them and snapped pictures. They are just about the right size! 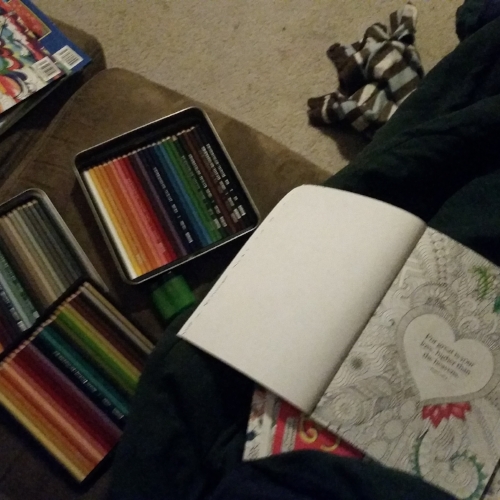 I’ve loved to color since I was a kid. Even through high school and college I had a collection of coloring books and looked forward to opening a brand new box of crayons. You can bet the surge in adult coloring has gotten me so excited! But I didn’t jump on board right away because the fancy coloring pencils are expensive and so are the books! Not something I could splurge on any old time. I printed off free pages I found on various blogs and used our stash of regular colored pencils but I wanted some that were just mine so I put them on my Christmas list. Micah bought me this pack of Prismacolor colored pencils and my parents stocked me up with dozens of coloring books. I think I’m set for the next decade! Especially for how long it takes me color, haha. But it’s incredibly relaxing for me at night while we watch tv. 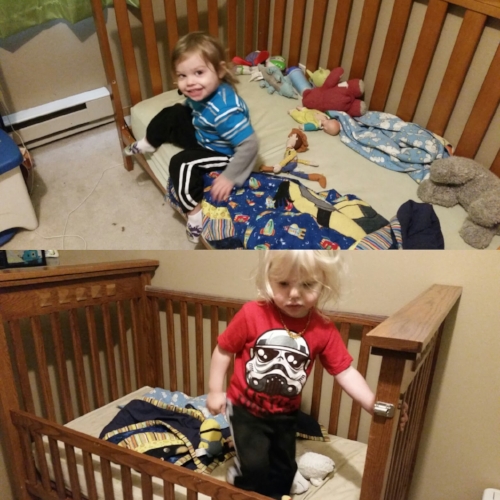 We made it just over two years and two months with these two being contained but they learned how to climb out of their beds. We have Angelcare monitors in both of their cribs and one day during naps I heard the alarm go off. I went into their room expecting to find one of them curled up in a corner where the monitor didn’t sense the movement but instead I found both of them stripped naked playing with Mr. Potato Head toys. Two days later we had their beds changed to toddler beds and their dresser secured to the wall. They are growing up! They are also doing a great job of staying in their beds and waiting for us to say it’s okay to get up. Hopefully that continues!

What brought you joy this week? What age did you transition your kids from crib to bed? Do you have snow where you live?